The Walking Horse Association of Ohio annual awards banquet was held in Canton, Ohio on Saturday, February 18th.
The attendance was large in numbers and spirits high. Lots of friends, exciting conversation, laughter and smiles. Add tasty food, cold drinks, hot coffee and the party is on.
Many awards were presented to honor the horse and rider’s performance throughout the year. The efforts were complemented through shiny ribbons displaying ratings—high point, champion, reserve, etc….plus classic awards as trophies, plates, etc…. Also possibly the best of awards—the applause of our peers, our pat on the back so to speak. The evening included praise, affirmation, and acknowledgement of skillos.
Maple Crest in specific was awarded the High Point Champion-weanling (Major Dante). Angela Barbour also received an award for her efforts.
Onward to the live auction—a high point of fun in the evening. The auctioneer stepped to his podium, called his assistants (Bryce & Brendin Morris) to attention and began the auctioneer’s song. The bidding became active with the presented items quickly sold and delivered to the tables by Paul and David. Along with the heated bidding there are “RUMORS” of large hugs, kisses, and laughter shared with the deliveries. Could this be a new promotional avenue for the auctioneer?
Appreciative thanks go to all who made this a night to remember. We all can share in a moment but many can share in a memory years from now. “Thanks”. 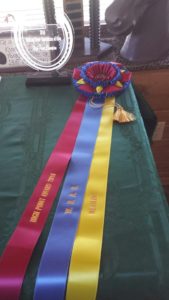 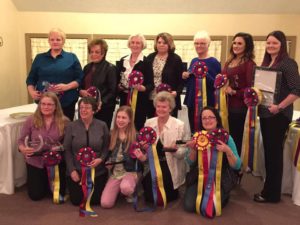 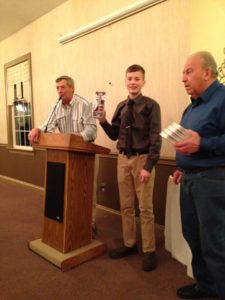